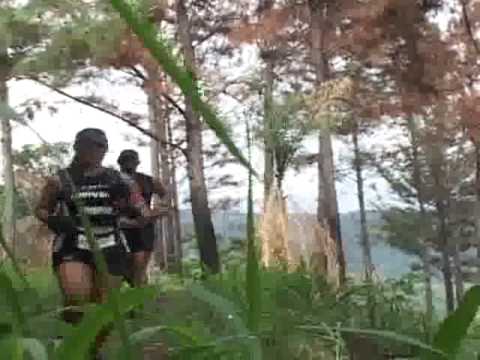 This year sixty (60) teams (43% more than last year) comprising of four (4) persons per team participated. Each team was required to hike/hash selected mountain trails within Trinidad as well as complete a series of team-work/problem-solving activities. There was an average of twenty-five (25) officials on the trails as well as eight (8) search and rescue paramedics.

Competitors were required to assemble at Maracas Beach opposite Sam’s Bar no later than 3:00am where numbers were assigned to each team as the final step to completing their registration.

Fusion 2010 started at 3:45am with an event titled ‘fill the bottle’ where, as the name suggests, each team was required to fill their labelled bottle using their labelled cup. Both of these items were placed approximately 200m away on the opposite end of the beach next to officials. A team member had to run along the beach to the officials and return to their team with the items. On returning to the team, they were now required to use the cup to fill the bottle with a red liquid from buckets at the same point where the bottle and cup were located; only 1 person per team was allowed to run at a time. Once the bottle was filled the team could proceed onto the trail which began at the back of Sam’s Bar. The filled bottle represented their token for entry onto the trail and they were required to have it in their possession at all times.

The first leg of Fusion was estimated to take from 2.5 hours (estimated fastest time) to 5.5 hours (estimated slowest time). This leg was approximately 10.4km long and had a total ascent of approximately 5,165ft. All four (4) team members were required to compete on this leg which included a ‘night’ hike and was marked with silver reflective tape. The first part of the leg comprised of a long painful ascent (which was compounded by the darkness) and 2 rope climbs amid the sounds of the night forest. This was followed by 5 multiple choice questions which carried time penalties if answered incorrectly. Teams continued along a fairly wide benching path along a mild downhill to the top of St. Joseph where they were required to solve a cryptogram which embodied the definition of Fusion.

By this time, darkness began to give way to sunlight and teams now faced the daunting task of a fairly short but excruciating climb. The downhill was technical, long and proved to be trying for even the best teams. Teams took the opportunity to cool themselves in a stream at the bottom of the hill before starting the final test for this leg; a 2km road run to the finish line at Maracas Beach. Team times for this event ranged from 2 hours 35 minutes to 6 hours 9 minutes.

The second leg started at the top of the Lady Chancellor Hill and this previously abandoned trail proved to be a very scenic one which few participants were aware of prior to Fusion. This leg was 12.5km long, required 3 team members and began at 11:10am. Three members from each team were directed down Teracita Hill, across to St. Anns and then to the bottom of Hololo Hill. On very tired legs, teams again had to conjure up their spirit to ascend a road hill which at this time would appear intimidating especially under full sunlight. By request from participants, some workers sprayed participants with water to cool them down; additionally, there was a scheduled water-stop at the top of Hololo. Much to the delight of the teams there was now some downhill but this was very short-lived as there was yet another hill climb but now in the forest. After a short but steep downhill, the trail flattened giving way to a majestic view of Santa Cruz on the right. Teams were now required to solve as many ditloids as possible with each correct answer reducing their overall time.

The trail continued to 2 large steel plates which serve as radio transmitters, then onto a long benching with several technical parts including treacherous cliffs and huge gorges; several of which were outfitted with support rope. The trail allowed for many splendid views of Port of Spain which drew closer with every step. The end of the trail was marked by a beautiful gorge spanned by a bridge; a rarity in the forest. The completion times for this leg ranged between 2 and 4 hours.

At around 5:00pm, teams (using 3 persons per team), were required to run for 5km from TGIF in a clockwise direction around the Queens Park Savannah and back to TGIF. They then proceeded down Victoria Avenue and headed toward the Fire Services Headquarters where they were rejoined by their fourth member. All four (4) members then continued running to the Cruise Shipping Complex at the Port Authority where they all received medals. This leg of the event ranged from 21 to 45 minutes and culminated in a prize giving ceremony within the packed Cruise Shipping Complex where there were prizes for the top 9 teams, team spirit, the top 2 female teams, the top port team and the most senior team to complete the entire event

The Port Authority of Trinidad and Tobago’s Fusion 2010 was coordinated, planned and managed by staff of the organization, led by Charles Bobb-Semple and supported by volunteer officials, was a tremendous success. The event received high kudos (website, email and word of mouth) from all participants. The support of Management and Staff of the Port Authority of Trinidad and Tobago was instrumental in the successful deployment of this venture. Additionally, the event’s success was concretised by the support from all of our sponsors: the Ministry of Sport and Youth Affairs, Gillette Fusion, Nature Valley, Subway, Container Recovery & Billing, Pilots Association, Oasis, Gatorade, Ocean Spray, Monster, Kiss, Gullon, Yoplait, Grace, Ovaltine, Oscar Francois, Angostura, Holiday Snacks, Johnson & Johnson’s, Agostini, Carib and the Sanctuary Day Spa.

In 2007, Fusion Adventure Races was birthed as a means of promoting the sport in Trinidad and Tobago. In year ONE Fusion hosted 14 – 4 persons teams; one annual race, hosted more than 100 teams. In 2014, 84 teams travelled to Tobago to participate in Fusion VIII. Fusion has earned its place as the premier adventure race in Trinidad & Tobago. The races take competitors through mountain trails, offering athletes the opportunity to discover the veiled treasures of the island from a unique perspective. Additionally, intrigue is built as participants are only informed of what is required of them at each successive stage.

One of the cornerstones of Fusion races, is that emphasis is placed on teamwork, rather than individual achievement. Another cornerstone of all Fusion’s activities is safety. No stone is left unturned. Through extensive event planning, experience and teamwork, the team ensures the execution of a quality event that is bond by fun, camaraderie and integrity. This event tests team spirit, ingenuity, skill and commitment while exploring the boundaries of what’s possible by pushing oneself physically and mentally. Our slogan – “When you cross the finish line, you’ll know a little more about yourself,” becomes a reality for all team and persons touched by the spirit of Fusion.

The overwhelming demand for Fusion events pushed us in 2015 to introduce an ancillary event called Fusion Lite. Fusion Lite acts as a preparation for Fusion and has become a scouting ground for those who are looking to put together a strong contending team for Fusion. Fitness enthusias and clubs use this event as a measure of their readiness for Fusion. It is an overall test on their mettle. Fusion Lite represents one (1) leg of the full Fusion Adventure Race and that year, it attracted one hundred and twenty-six (126) teams of two (2). In 2016, two hundred and eleven teams (211) teams participated in Fusion Lite II !!

The bar was raised in 2018. “Fusion One on 1” was introduced. Three hundred and ninety-five (395) participants competed as individuals against one course. The Lluengo Loop starting and ending at Maracas Beach was the course. This will remain the location for several years so that persons can compete against their own time.

We have partnered with leading hiking clubs and fostered a symbiotic relationship through revamping defunct trails and creating new ones which hike clubs make full use of throughout the year. We are known for integrating ourselves into the communities that we take the race to as we incorporate the history and culture of these towns and villages into the intellectual challenges of the race. Promotion of history and culture of remote villages through knowledge transfer and education is another objective of the Fusion brand. An excellent example of this was our partnership with village elders and leaders of Lopinot, Brasso Seco and more recently Gran Couva when we took the event there.

Being the difference we want to see

As we trek across a course, we become one with the environment. We see, smell and breathe in what others can only begin to imagine. As a result our horizons are broadened. Over the years, the diversity of our teams be it culture, race, etc challenged us to learn and then learn some more not just about racing but the variety of issues that affect our racers and their families.

In 2018, the race highlighted the triumphs and challenges of those living with Autism. In 2019, our focus is on Child Abuse. To ensure that the services formed to address this dynamic in our country were incorporated we formed a partnership with the Children’s Authority of Trinidad and Tobago. One of the aims is to have our teams, volunteers and sponsors become an additional channel through which conversations and deliberate discussions can take place to learn about and adder the problem of child abuse in our country.

Teamwork is an integral part of Fusion and we have observed that to work together as a team, persons must be willing to listen and make the requisite adjustments in order to succeed. We believe that this philosophy is applicable in the family and by extension our country. Within the family, as with a team, we must observe each other in particular our children. The phrase that they are our future can never be overstated or become cliché. It is our responsibility to become consciously aware of how our actions impact them; we must understand why they may be exhibiting certain behaviours.

It is because of the aforementioned symbiosis of working as a team, caring for each other, compassion with willingness to adjust that we can be an additional means through which child abuse prevention can be communicated in a meaningful manner and consistently.